Why we're still living with mom and dad
By Ryan Vandecasteyen
Everywhere you look, younger generations are taking the blame for their delayed life choices. “Where Generation Y Is Failing To Launch,” reads the headline of a recent Huffington Post Canada article summarizing the findings of a recent Statistics Canada report on the increasing number of twentysomethings who are choosing to live at home with their parents.

What this article and articles like it fail to point out is that many young people aren’t living at home for the fun of it or because they’re lazy. Many “just can’t leave the nest” - quite simply because they are poor. And this poverty is costly to all of us.

Things are rosier in Victoria, Saskatoon and Quebec City, where the rates of twentysomethings living at home are just below 30 per cent; the lowest in the country. 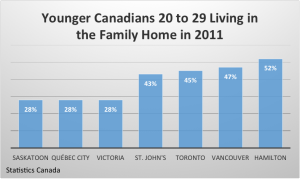 At its most generous, the popular wisdom generally points out that more young people than ever before are pursuing post-secondary education. It makes sense for them to stay at home until they have a steady income. The Statistics Canada report mentions that fewer young people are moving in with their significant others to share financial burdens.

At its worst: millennials are the laziest generation ever. Or the most fearful. Earlier generations found jobs, moved out, started families, all while pursuing higher education. Millennials are just entitled and their parents too patient.

In fact, earlier generations did do more, but not because they were less lazy or fearful. They did more because they had the opportunity to do more. Costs of living were lower. So were costs of buying a house and starting a family. So were costs of pursuing an education. What’s more, it was also a lot easier for young people to find a decently paying job, even if only for the summer. Incomes among twentysomethings have declined steadily since the late 1970s; unemployment levels have risen. 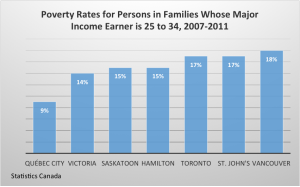 Canadians need to think seriously about what it means to have so many young adults living in poverty today. Choosing to live with one’s parents is not a free ride, it’s a strategy to make ends meet. As long as young people in places like Vancouver, Toronto and St. John’s are struggling to put food on the table, they are not investing in their long-term prosperity – a long-term prosperity in which we are all implicated.

The young adults living in poverty today will be the breadwinners of tomorrow, whether they are able to benefit from smart investments in early adulthood or not. Soon enough, Canada’s children and elderly are going to depend on them.

Chuk Plante is the Policy Director for Upstream, an Institute dedicated to creating a healthy society through evidence-based, people centred ideas. Learn more at www.thinkupstream.net. Follow him on Twitter @chuk_here.