I can’t help but ask, WTF?  Where’s The Family in all of these elections?  Where were the policy promises to remedy how young families now have less time together, less household income after housing, and insufficient services to balance work and young kids, compared to the previous generation.  If not in elections, when do we talk seriously about the higher housing prices and stalled household incomes with which Canadians age 25-44 struggle despite being more committed to the labour market than any other generation in recent memory?

Sure many candidates referred to families.  And many made sure their spouses and children appeared for photo ops to convey their commitment to family values.  But talk and photos are cheap.  Putting the family back in the core of Canadian values requires policy innovation and re-allocation of substantial resources.

Since political parties of all stripes across the country are slow to develop policy to resolve Canada’s bad intergenerational deal, I propose in this column a New Deal for Families, one informed by leading national and international research.  It’s then up to Gen X-it and Boomers who care about their kids and grand-kids to ensure the next elections give serious attention to proposals like these.

Given global economic turmoil, we are living in very complicated times.  But this complexity should not mean we forget that the Canadian economy grew 108% since 1976, even after adjusting for inflation.  On average, this means it produces an extra $35,000 per household.  Compared to a generation ago, our country has far more resources with which to address the ways in which it is harder to raise a family today – and do so as a part of our efforts to navigate the challenging economic waters.

Since the generation raising young kids is squeezed between the need for time at home and time to earn a living because wages lost ground as housing prices rose, a New Deal for Families should organize around the concept of a Time Dividend.  When talking about dividends, the stock market provides a reasonable benchmark for prosperity sharing.  Just as Dow Jones Industrial stocks paid an average annual dividend of 2.8% in 2010, a Time Dividend in Canada could use 2.8% of the economic prosperity produced today compared to the mid-1970s to alleviate the time, income and service pressures faced by Generation squeeze.

2.8% equals $22 billion annually – a national dividend for families to be financed either by (a) less public spending on other things; (b) higher taxes, or fewer tax write-offs; (c) new business investment; and/or (d) deficit financing – spend now, pay later.  Reasonable people will differ about which of these options to prioritize or combine.  But it is critical to recognize that these are the only options, save one:  accept the status quo by doing nothing to address the decline in the standard of living for the generation raising young kids.

A Time Dividend would get Canadians back to basics.  It would:


To pay this Time Dividend, three policy changes are required:

New Mom and New Dad Benefits to ensure all moms and dads, including the self-employed, can afford to be at home with their newborns, at least until children are 18 months. 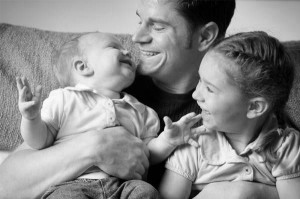 Extend parental leave from 12 months to 18 months, generally reserving the extra six months for dads (with exceptions for lone-parents and same-sex couples).

Caring at home would be made affordable by insuring 80% of parents’ income up to $60,000 a year. This increase will double the existing maximum benefit.

A new minimum $440 weekly benefit will be available to ALL parents, enough to eradicate child and family poverty for this age group.   Moms and dads who currently do not qualify for leave would see their after-tax household income increase by at least $13,500 in the 12 months following the birth of their child.

$10 a day child care services will ensure that parents can afford enough employment time to manage the rising cost of housing and stalled household incomes.

Reduce child care service fees for children over 18 months to no more than $10/day (full-time) and $7/day (part-time), making it free for families earning less than $40,000/year.

Invest adequate funding for kids to spend their time in developmentally stimulating activities and play, including children with extra support needs.  Child care workers will have appropriate training in child development, and earn pay equity wages.

The services will supplement, but never replace, the care that families provide.  Families will be able to use the parenting support even if they do not choose to enrol their children in non-parental services.

Where numbers permit, families could choose programs that feature a language other than English or French in recognition that Canadian families speak many languages at home.  For Indigenous citizens, services will prioritize exposure to the languages and cultures of First Nations, Métis and Inuit as part of Canada’s commitments to Truth and Reconciliation.

Flex-time for employees and employers to remedy workplace standards that too often make it standard practice to ignore the family.

Adapt overtime, Employment Insurance, and Canada Public Pension premiums paid by employers to make it less costly for businesses to use employees up to 35 hours per week, and more costly for hours thereafter.

Overtime will kick in at 35 hours a week (averaged over a year). Overtime premiums will be paid either as cash or earned time away from work.

With new incentives, employers would reduce the work week by 3-5 hours for the half of men and the third of women who currently work more than 40 hours/week.

These employees would trade some after-tax wages (or future wage increases) in order to gain around 4 more weeks of time per year. In negotiation with employers, this time could be taken in chunks, or as earned hours away from work each week.

Changes to the National Child Benefit Supplement will ensure any reduction in employment hours does not reduce income in low-earning families. For other families, the reductions in earnings will be offset because the $10/day child care plan will reduce households’ child care expenditures by thousands of dollars a year

Employees who currently work part-time hours would gain opportunities for more employment. Within two-parent homes, flex-time may not change the total hours that parents work, but redistribute them more evenly between dads and moms.

For each Canadian adult, the cost of this New Deal would be $1.67 per day in the first year, and cheaper thereafter as benefits to government, the business community and society increase over time.  $1.67 is less than a cup of coffee and doughnut at Tim Hortons. 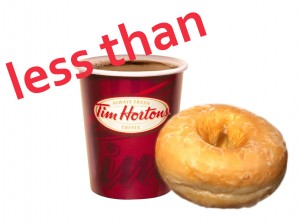 $22 billion is less than one and a half percent of the Canadian economy.

It is about one-third of what Canadians currently pay for Old Age Security and RRSP subsidies, and 16% of medical care.

We know this price tag is doable.  Between 2007 and 2010, Canadians increased our public spending on medical care by more than $22 billion annually.  Clearly, $22 billion can be found for priorities.

The real question is:  Do Canadians prioritize a Canada that works for all generations?