You deserve an age breakdown of government spending. Here's your champion.
Without a breakdown in generational spending, it's too easy for politicians to resort to platitudes like “younger Canadians are our future”, while budgeting in ways that compromise our present and future.

How much is your government investing in YOU this year? One way to answer that is to look at how much federal and provincial governments invest in different age groups. Naturally, we’re always going to spend more on people as they age. But too of big an imbalance is a sign that governments aren’t working equally for young and old alike.

We need someone to crunch these numbers every year! So far, we’ve been doing it ourselves, but it would be way easier for governments to take over. That’s why we’re excited to tell you Ontario Liberal MP Nathan Erskine-Smith has been busy behind the scenes, working to make this a reality. 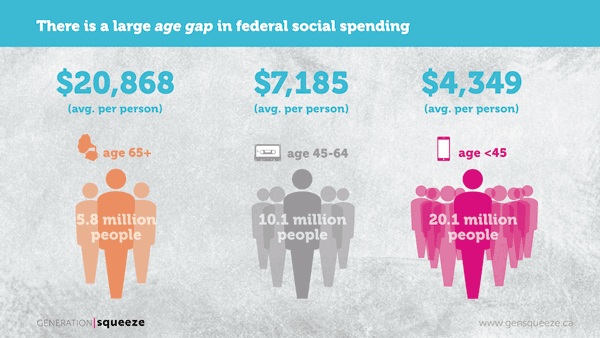 Back when Generation Squeeze got its start, we launched a campaign to decode government budgets so we can understand how Ottawa and different provinces distribute social spending in their annual budgets to those under age 45, 45-64, and age 65+.

While we understand it may seem less glamorous or significant in comparison with our work to rein in home prices and child care fees, we ask our governments to report this age distribution because it would normalize an important conversation among elected officials and citizens... 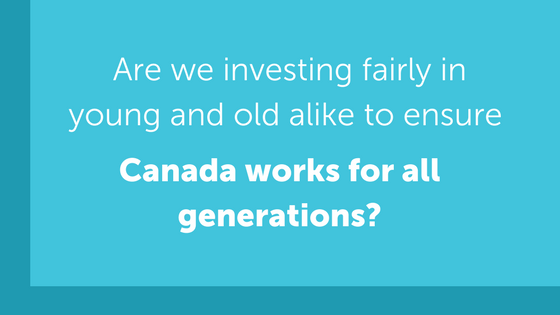 Right now, those who represent us in parliament don’t get an official age breakdown of government spending and revenue trends. In the absence of this information, too many resort to platitudes like “younger Canadians are our future”, while budgeting in ways that compromise our present and future.

That’s why Gen Squeeze has been filling the gap. We developed methodologies and published studies that show Canadian governments combine to spend over $33,000 per retiree by comparison with less than $12,000 per person under age 45.

Over the past few years, we’ve written short analyses of budgets in every province, and for Ottawa, too. When we do, we offer to support governments to adopt and refine our methodologies so that they can take over this important work.

Happily, some parliamentarians have begun to listen.

Earlier this spring, Nathaniel asked the non-partisan Parliamentary Budget Office (PBO) in the Government of Canada to act on our spending gap campaign by providing MPs with an age breakdown of spending in the 2017 federal budget. 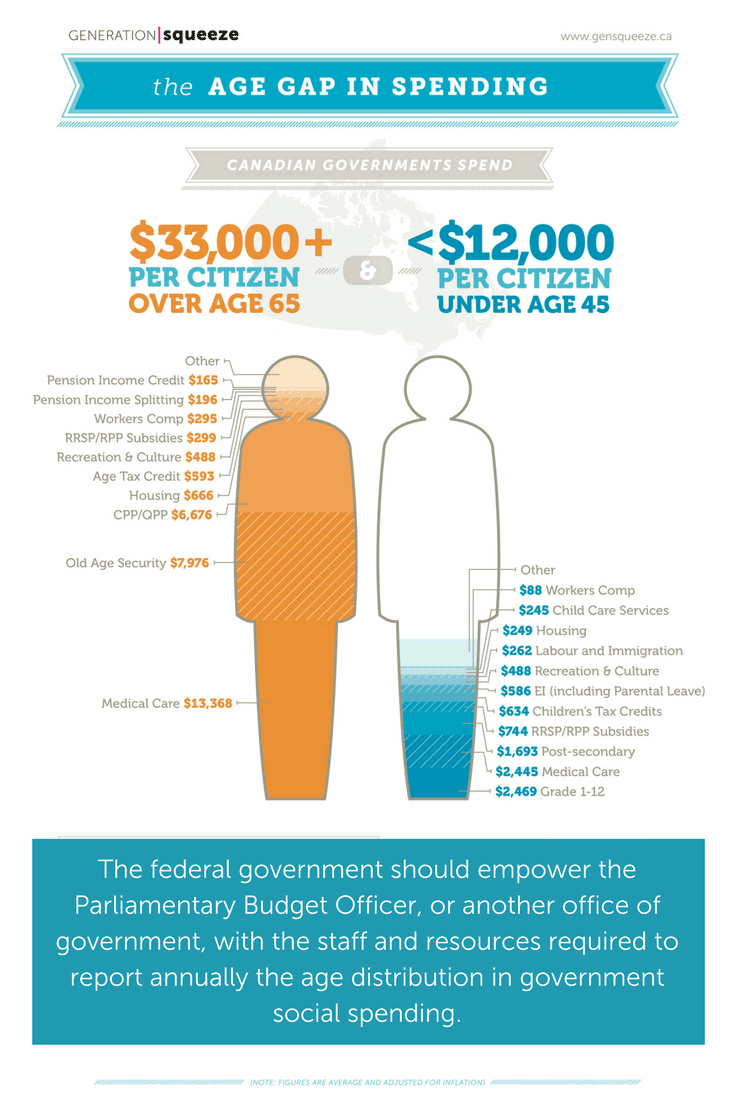 He then co-organized a global conference of young parliamentarians from more than 50 countries, and invited Generation Squeeze to bring our ask for age-based reporting in government budgets to countries around the world.

Happily, by the end of October, the PBO acted on Nathaniel’s request, which means we’ve officially encouraged the first ever attempt by an office of the federal parliament to report the age distribution in spending, just as we’ve asked in our spending gap campaign – and it’s reason to celebrate! However, it’s just a mini-victory at present, because the request as outlined in this blog post from the PBO is not very sophisticated.

We’re grateful to MP Erskine-Smith for encouraging further collaboration between the Parliamentary Budget Office and the Gen Squeeze lab. We’re hopeful that this collaboration can improve the methodologies and data sources that our lab has developed, and result in even better age-based analyses for Canadians than we have produced so far. 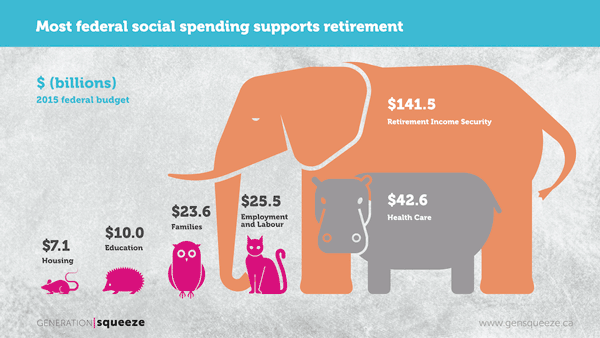 Nathaniel let us catch up with him last week so we could get more insight into why he’s motivated to work on something we’ve always been so passionate about. 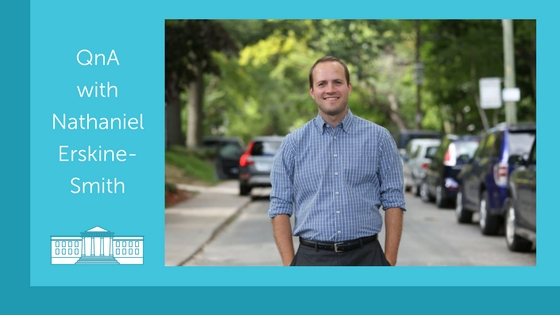 Why are you interested in Gen Squeeze’s research about the age distribution in government spending?

As young Canadians face increased costs in education, childcare, and housing, it’s important to understand how governments allocate resources across generations to ensure there is fairness across generations. Gen Squeeze’s research gives me and other political representatives the tools to better tackle those questions of fairness.

Why do you coordinate a caucus of young parliamentarians in the federal Liberal Party?

I’m a member of our Liberal youth caucus and helped to establish it. I also have an active youth council in my riding. Simply, it’s important for younger Canadians to have a voice in our caucus and in our government.

I’m also an executive member of a global forum of young parliamentarians through the Inter-Parliamentary Union (over 170 countries), and have recently helped to host over 120 young MPs from over 50 countries here in Canada. We need strong youth representation around the world if we want to see significant action on confronting climate change, addressing income inequality, and strengthening our democracies. 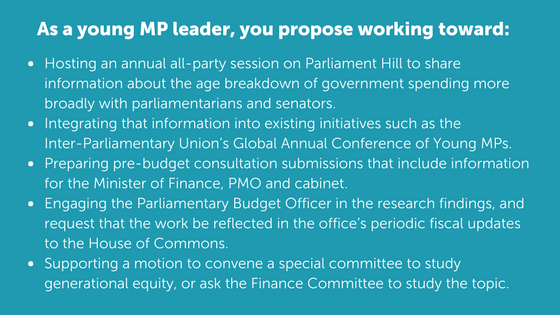 Why do you think these are important activities for young MPs to lead? What positive changes might they achieve? What excites you about the ways that Generation Squeeze could support these activities?

We debated generational budgeting at the recent IPU global conference of young parliamentarians here in Ottawa, in which Gen Squeeze participated and provided a valuable contribution. I’ve already been in discussions with the Parliamentary Budget Officer here in Canada about incorporating a generational spending analysis in its reporting.

These actions, and others yet to be taken, can help to change our political decision-making if they become part of our established budget framework. Future spending decisions must be informed by long-term trends in costs, opportunities, and spending as between generations.

I’m optimistic that these actions will help to change federal spending decisions in the future, for our future.