Episode 1: Generational fairness? What the #[email protected]!% is that?

Paul Kershaw and Angie Chan confront Gen Squeeze's first Hard Truth: Canada has a generational fairness problem. If you've never heard the term, you probably know the symptoms of this systemic disease: unaffordable housing and child care, low wages, climate change. Listen and learn what generational fairness means and why it matters so much to the lives of younger and future Canadians.

Unaffordable housing is a symptom of generational unfairness that most young Canadians know all too well. Across Canada, it’s a hard and obvious truth that our housing system is completely broken for those of us wanting to buy a home, settle in our communities, and achieve some financial security and autonomy. But for people who own homes, the housing system is actually working fabulously well, making them wealthier while they sleep. Gen Squeeze thinks Canada is culturally and politically addicted to high and rising home values. How can we break this dangerous housing addiction? This special bonus episode is a recording of a live virtual event on March 29 hosted by Gen Squeeze founder Dr. Paul Kershaw.

Episode 2: Busting the myth of the lazy millennial

The myths that young Canadians are lazy and seniors are poor have real power in our lives and the world of politics. These myths fuel our broken generational system and distract us from solving today's most pressing problems. Join Dr. Paul Kershaw and Angie Chan on a myth-busting mission in Gen Squeeze's second Hard Truth. Challenging these assumptions will help make Canada work more fairly for all generations.

Turn the lights down low, slip into something comfortable, and get ready for...the federal budget! Budgets shape all of the actions governments take, so if we want progress on housing, child care, climate change and generational fairness, it needs to be baked into our governments' budgets. In this recording of a recent live virtual event, Gen Squeeze founder Dr. Paul Kershaw goes beyond the flashy headlines to explain what the new federal budget really means for younger Canadians.

A generational bias in Canadian politics prioritizes seniors in government budgets, leaving younger generations fighting for table scraps. Generation Squeeze founder Dr. Paul Kershaw and host Angie Chan interview Sean Speer about the generational unfairness baked into Canada's budget pie and how it's harming younger and future generations: from unaffordable housing and a diminishing middle class, to not having as many children as parents want. Sean is editor-at-large at The Hub, the PPF Scotiabank Fellow at the Public Policy Forum, and an assistant professor at the University of Toronto's Munk School of Global Affairs and Public Policy. He was previously a senior economic adviser to former Prime Minister Stephen Harper.

Are you wondering what the heck just happened in Ontario's election? Co-host Umair Muhammad chats with Dr. Paul Kershaw and Andrea Long about why less than half of ON voters turned out and what voter apathy means for generational fairness in Canada. 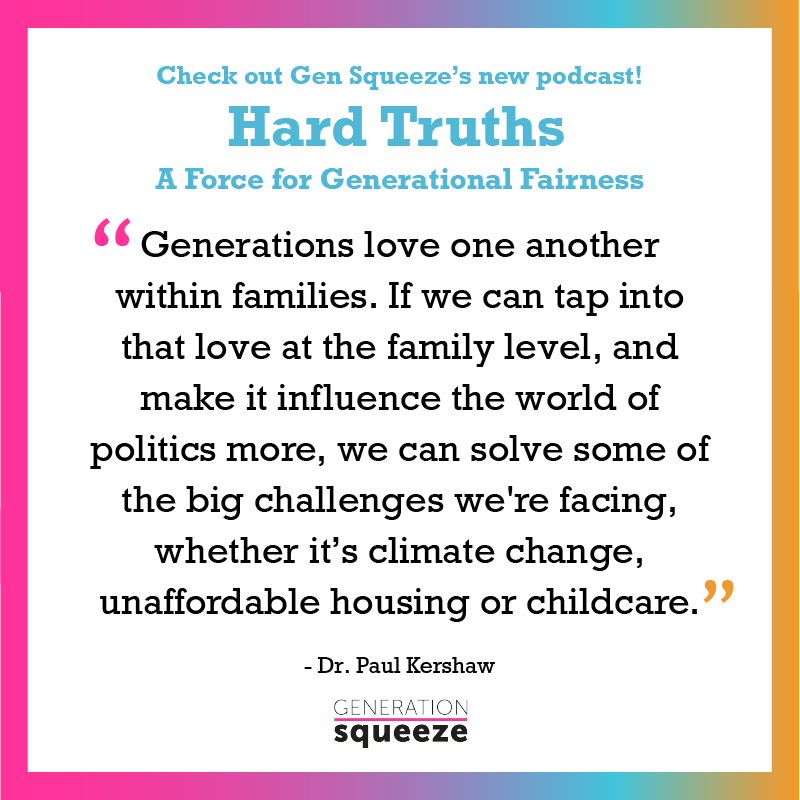