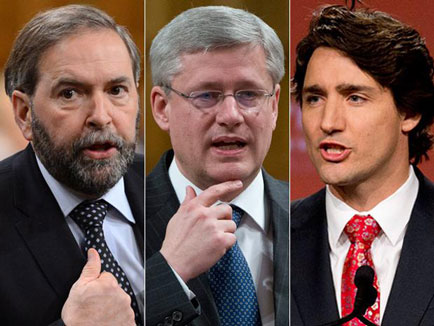 Family policy is front and centre in the lead up to the October federal election. The Conservatives and the NDP had already weighed in, putting billions on the table. Mr. Trudeau has now offered some specifics of his own by promising to consolidate federal child tax benefits.

We’ve crunched the numbers to see how the three big parties would change investments in families in the year after the election.

Mr. Harper would inject $4.6 billion in new money for families with children in his budget via income splitting and the expanded Universal Child Care Benefit (UCCB).

UPDATE (September 28, 2015).  The NDP promise to keep $2.6 billion budgeted for the expanded UCCB, but not other money earmarked for income splitting. Instead, they will add $595 million toward their long term vision of $15/day child care, and $500 million for low-income families to be delivered through the National Child Benefit Supplement and Working Income Tax Benefit.  This brings the NDP investment to $3.7 billion.

The Liberal plan would reallocate funds from income splitting and the UCCB along with other child tax credits to create one consolidated Canada Child Benefit to which they would add another $2 billion.  This makes the Liberal investment $6.6 billion – billions more than both the Conservatives and NDP.

Not only would the Liberals spend more, their tax credit is better designed – especially compared to the Conservative plan.

While income splitting reaches about one-third of families with kids, the Liberals would spread their entire investment among a broader group of families.

While income splitting delivers the larger benefits primarily to higher earning families, the Liberals would do the reverse:  delivering larger benefits to lower and middle income households.

While the design of income splitting and the UCCB reinforces gender roles, the Liberals plan is more neutral about how moms and dads divide paid and unpaid labour.

The Liberals have not yet made specific policy commitments to child care services.  This is a major omission because younger Canadians need more time in the labour market than a generation ago to fend off lower earnings and higher housing costs. The Liberals insists they will make further announcements about child care.

The NDP might appear stronger on this issue, promising $15/day child care.  However, Tom Mulcair will only budget about five to ten per cent of the cost of his promise in the first year after the election. After 8 years, he will only put half the money on the table.

The medical care elephant in the room

Mr. Mulcair doesn’t talk about it, but the limited funding he intends for child care is tied partly to his approach to medical care.  Conservatives and the NDP both plan to grow the Canada Health Transfer to provinces.  But the NDP would allocate billions more than the Conservatives, and do so faster.  In three years, the NDP intends to increase annual health care spending by more than the entire amount they plan to spend on child care eight years from now.  This begs the question: is $15/day child care as much of a priority as the NDP sometimes suggests?

As the Liberal leader ponders how his party should balance spending on medical care with other options like child care, it’s worth acknowledging that Canadians don’t get bang for our medical care buck.  Evidence shows Canadians spend more on medical care than many other rich countries, but get only middling or below average access to doctors, CT scans, MRIs and patient satisfaction.  We do, however, get well paid doctors.

With Generation Squeeze, the Canadian Public Health Association is presenting a half-day session at its annual meetings that will explore how to contain the growth of medical care spending precisely because evidence shows other uses of the funding would better promote health.  All political leaders should take note, and revisit their own social spending priorities heading into the federal election.

Dr. Paul Kershaw is Founder of Generation Squeeze, and a policy professor in the University of BC School of Population Health

Many young Canadians say they don’t vote, because it’s difficult to discern the key differences between party platforms. Generation Squeeze aims to fix this by serving as a trusted, absolutely non-partisan source of analysis about party platforms.