Analysis of the 2022 Ontario Budget

Analysis of the 2022 Ontario Budget

The overarching theme in this budget is that it demonstrates little urgency to address major challenges facing Ontario, beyond fighting COVID and improving medical care. The province relies on the federal government to improve child care, offers little for housing affordability, and mentions “climate” only 5 times in 268 pages.

The numbers in this budget invite the question: why are crises related to child care unaffordability, housing unaffordability and climate change treated with less urgency than medical care?


Medical care bullies investments in the wider determinants of health 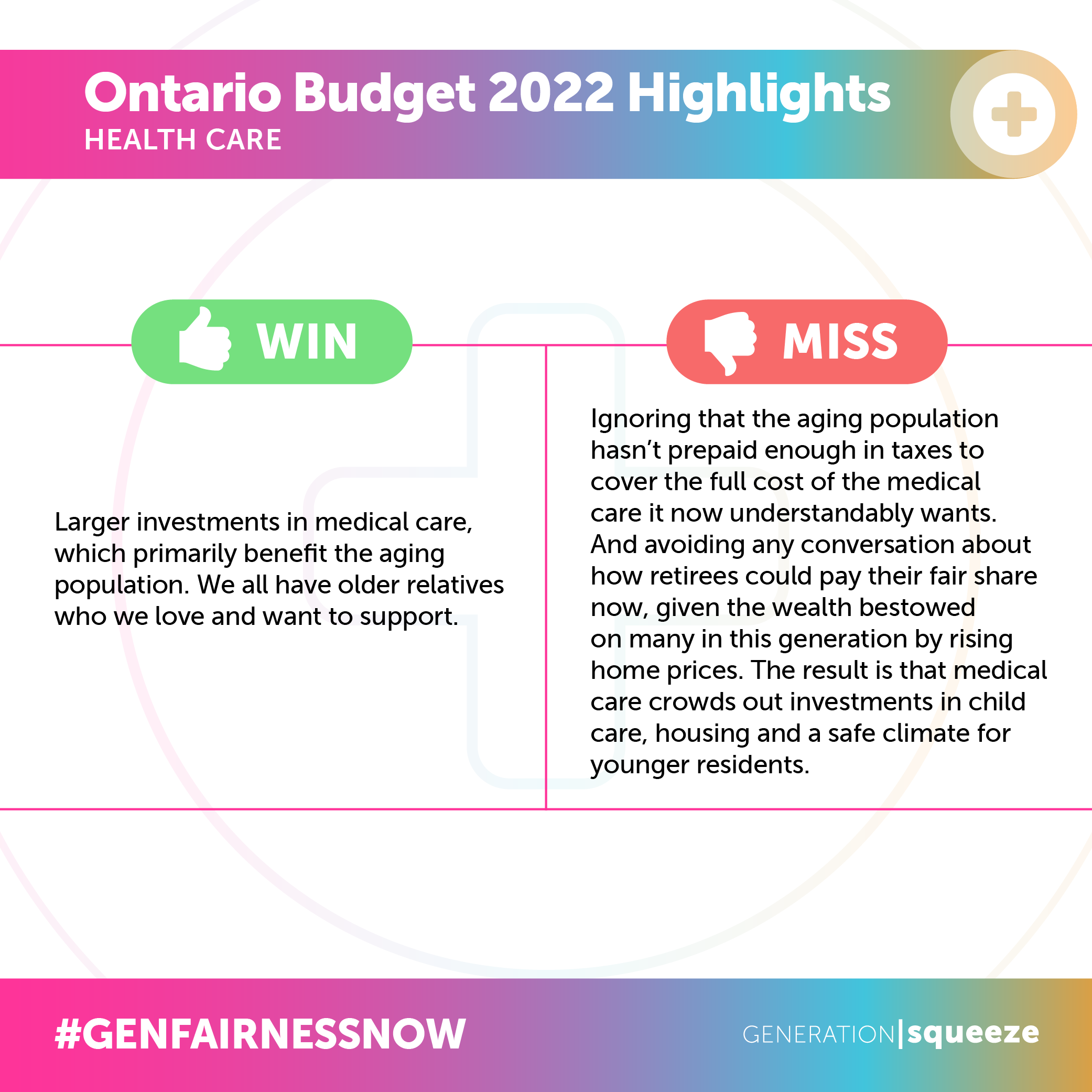 Medical care continues to be the big winner (or big bully?) in the Ontario budget. At over $70 billion in annual spending, medical care is already equivalent to half of total provincial spending on health, education and social services (see Table 3.8). The annual medical care budget will increase by another $7 billion three years out, meaning that it will receive as much new investment as child care, housing, education, postsecondary and social services combined.

Our medical care system was never supposed to go it alone. It’s meant to be part of a wider system supporting people with the things they need for good health, like decent earnings, homes, child care, and a sustainable planet.

We want a good mechanic when our car breaks down, just like we want a good doctor when we’re sick. But what we want even more is to stay out of the repair shop. We can by investing in social conditions that make and keep us healthy. Budget 2022 missed the opportunity to invest more urgently in the social conditions we need to create health, to help prevent people from needing medical care.

It’s a biological reality that we use more of medical services when we’re older, and Statistics Canada’s census data has just reminded us that Canada’s population is aging. This means that allocating the largest investments to medical care gives rise to worrisome age patterns in provincial spending. For example,Budget 2022 allocates approximately $500 in new provincial funding for every resident age 65+ compared to just $100 per person under age 45 – even when counting all of the new federal funding for $10 a day child care. All the while, climate change puts the health and economic wellbeing of younger and future generations in jeopardy – but the term is barely mentioned in the budget.

While the 2022 Budget provides Ontarians with easy access to information about provincial GDP, economic growth, debt and deficits, it fails to adequately break down spending by age. As a result, Ontarians are unable to assess whether the province is budgeting fairly for young and old alike – leaving Gen Squeeze to crunch the numbers after budget decisions have been made.

Big deficits outside of a recession? 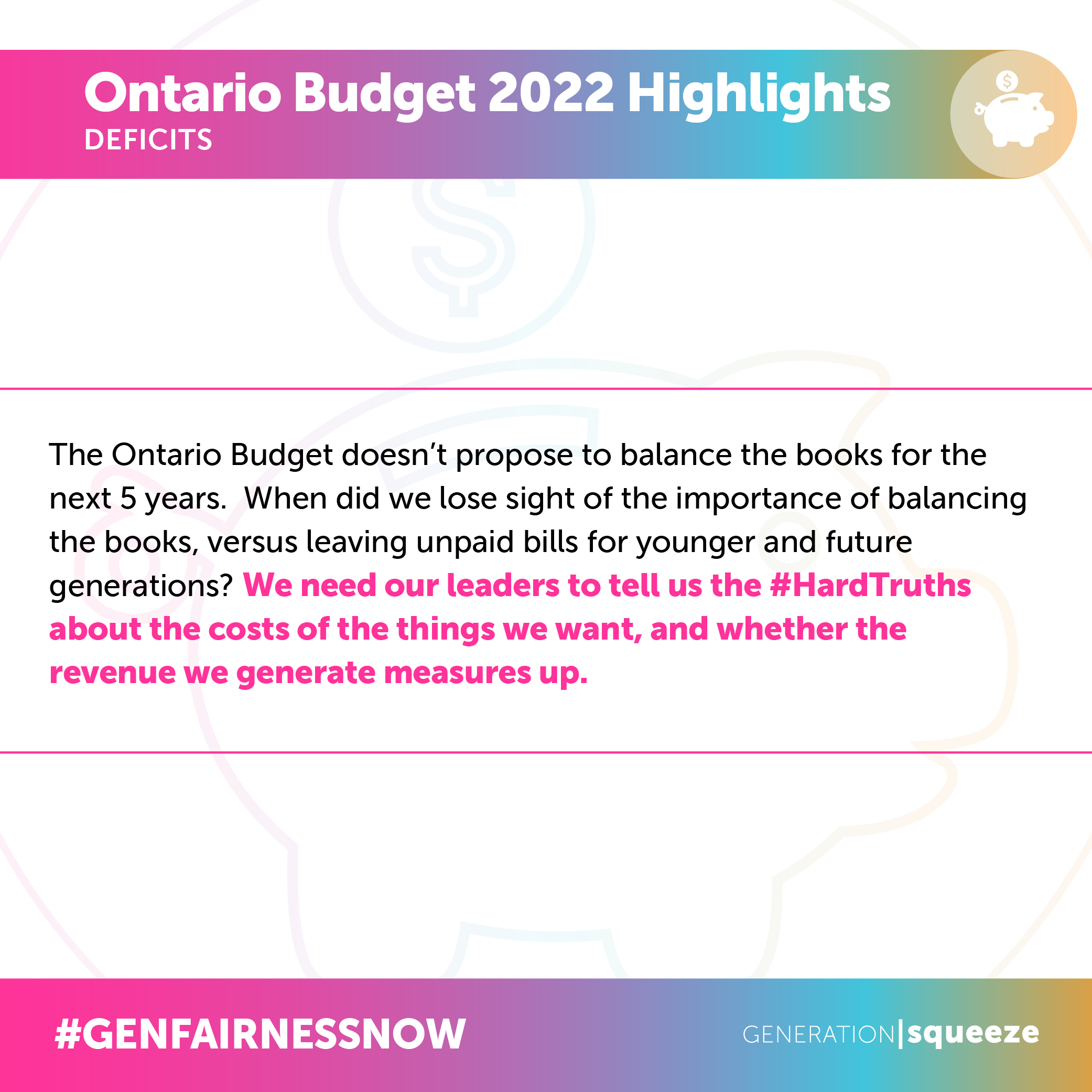 Another generational tension in the Budget is provincial deficits – which (like age gaps in spending) are driven by medical care.  The planned increase in medical care by 2024/25 is nearly identical to the $7.6 billion deficit planned in the same year – even though Ontario is not projected to be in a recession at that time!

By hiding the link between medical care spending and ongoing deficits, Budget 2022 misses the opportunity to initiate a serious conversation about what is driving our deficits, and how to address it.  This is a big problem for generational fairness. When did we lose sight of the importance of balancing the books, versus leaving unpaid bills for younger and future generations? We need our leaders to tell us the #HardTruths about the costs of the things we want, and whether the revenue we generate measures up.

Incurring routine deficits outside of a recession imposes serious financial pressure, especially when deficits are not incurred primarily to fight problems like climate change or housing unaffordability that especially harm younger and future generations.  For example, Budget 2022 shows that government interest payments on the provincial debt will be $14.9 billion as of 2024/25.  That interest payment alone is markedly larger than the entire amount that the Ontario government spends on postsecondary education ($11.4 billion).

It’s great to see historic investments in $10 a day child care in the Ontario budget. Gen Squeeze branded “$10 a day” over a decade ago to insist that child care shouldn’t cost another rent or mortgage sized payment. As housing prices continue to skyrocket, families need all the help they can get to keep living costs manageable.

That’s why $10 should be the MAXIMUM fee, not just the average. Ontario’s 2022 budget misses an opportunity for the province to invest urgently in child care affordability.  Almost all of the new dollars for child care come from the federal government.  So it’s really Ottawa that deserves credit for addressing this major affordability barrier.  Given that Ottawa is doing the heavy financial lifting, it’s disappointing that the Ford government’s Budget didn’t invest some provincial tax revenue to ensure that fees don’t rise above $10 a day.

There’s lots of talk about housing affordability in Budget 2022.  Changes to the foreign buyer’s tax, and support for cities to implement vacant homes taxes, are useful.  But these changes have been tried in BC, so we know that they aren’t game changers.

Municipal government gatekeepers are the primary target of the Ford government’s plan, as the province aims to accelerate and incentivize cities to approve new developments more quickly. The Ford government is right that local government gatekeepers can be a problem when their zoning regulations limit density, especially the construction of deeply affordable co-op and rental housing. But if their changes get in the way of local governments influencing new housing so that what gets built actually has enough bedrooms for families with kids, and gets priced in reach for what locals earn, that’s a worry.

While Budget 2022 acknowledges that Ontario has a housing crisis (p. 94), it fails to recognize the province’s addiction to high and rising home values as a root cause. The wealth many homeowners gain from skyrocketing prices is the unspoken flip side of unaffordability. Indeed, the budget brags on p. 154 that “Home resale prices have also increased strongly – by February 2022, the average home resale price in Ontario was 53.8% higher than the February 2020 pre-pandemic levels.”

This is disturbing. No government should take pride in economic trends which now mean it takes 22 years of full-time work for the typical young Ontarian to save a 20% down payment on an average priced home. That’s more work than required at any other time in Ontario’s history – and six years more work than before the pandemic.  It’s also a staggering increase from the five years it took in 1976 when many of today’s aging population started out as young people.

The #HardTruth is that “To restore affordability for all, we need home prices (minimally) to stall, so that earnings can catch up.” So far the Ford government hasn’t been brave enough to take this position in its budget – perhaps out of fear of angering homeowners.  But polling shows that two-thirds of Ontarians support this position.

The Budget does make incremental housing investments. But the budget for the Ministry of Municipal Affairs and Housing is surprisingly small – just around $1.5 billion/year in each of 2023 and 2024 (Table 3.12). Clearly, that’s tiny by comparison with the nearly $80 billion received annually by the Minister of Health – even though a safe, warm home is a critical determinant of health! It’s also surprisingly low given that Ontario revenue from the land transfer tax is up by more than $2 billion annually compared to before the pandemic (see Table 3.11).

While the provincial government is quick to ask Ottawa for more funds under the national housing strategy (see p. 97), it misses an opportunity to urge the federal government to make a systemic change that would cost almost nothing.  Budget 2022 makes no mention that the Ontario government will urge Statistics Canada to fix its inadequate measure of housing inflation. Had Stats Canada reported accurately on housing inflation years ago, we could have recognized the perils of runaway prices sooner, sparing younger generations the burden of coping with soul-crushing levels of unaffordability.

Finally, while the Ontario government aims to close tax loopholes and tax avoidance among foreign buyers of local housing (p. 97), Budget 2022 makes no mention of the home ownership tax shelter, nor offers any plans to soften its sharpest edges. Just like offshore tax shelters motivate moving money out of Canada to preserve assets, the home ownership tax shelter motivates us to bank on rising home prices to gain wealth – as observed by a majority of Ontarians in recent polling. Any policy system that turns home ownership into an investment strategy entangles owners in the hope that home prices will rise beyond local earnings, which is crushing affordability and harming younger and future generations.