WIN: Ontario does away with harmful 1991 rent loophole

Over the past week the Ontario government made big moves to close the arbitrary and outdated post-1991 rental loophole that permitted limitless rent increases for many tenants.

This is a huge win for renters who deserve affordable and predictable rent! With the changes, limitless rent increases are now illegal, and rent increases for existing tenants can be no higher than the rate of inflation, capped at 2.5 per cent.

Congratulations are in order for everyone who signed petitions, spoke out in the media, and spoke up to politicians — whether through Gen Squeeze, other organizations, or individually.

The loophole closure was first announced on April 20 in the Ontario Fair Housing Plan, then passed in the legislature on April 27.

Why was this allowed in the first place?

In 1997 the Ontario PC government exempted rental units built after 1991 from rent control. The idea was that if you removed the controls, developers and investors would be more inclined to build much-needed rental stock, and that competition in supply would keep rents down. But the anticipated wave of rental construction didn’t happen. Instead, prices just went up (especially so in recent years), and many people have been crushed by price gouging and a lack of rental security.

Since 2003, data shows that typical younger Ontarians have lost seven years of hard work when measured by the labour required to save for a down payment on an average-priced home. This is crushing dreams of home ownership, and contributing to growing competition for rental homes.

Then things got heated

Over the past few weeks, the out-of-control rental situation has been all over the media. In response, the provincial opposition NDP put forward a bill to expand rent control to units built since 1991 (i.e. to close the loophole), and when we met with the Premier's office they said they were seriously considering doing just that.

Even though the rent control issue benefited from good media coverage and existing policy momentum within the government, it faced resistance and needed an extra push.

3,233 of you signed on our petition to end the 1991 rent control loophole. This was also our most successful recruitment activity! 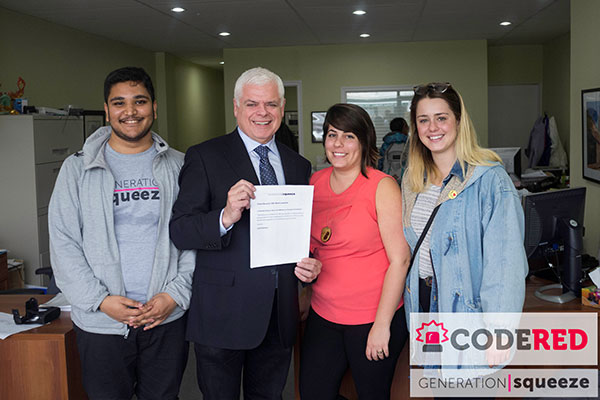 On April 27, 2017, the petition was presented in the legislature by Minister of Housing Chris Ballard. But first, Code Red campaigners Amara Possian and Fatin Chowdhury along with Brenna Owens from the Friends of the Greenbelt Foundation met with Toronto-Danforth MPP Peter Tabuns on April 20. That's him holding a copy of our rent control petition!

Gen Squeeze in the media 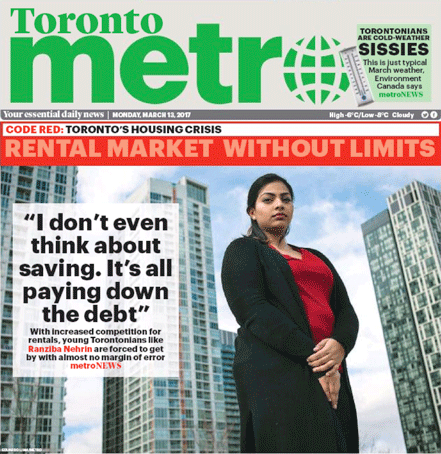 And a special shoutout to all the other groups who were working hard on this issue like the Federation of Metro Tenants' Associations, and CBC reporter Shannon Martin for her personal story that really helped the issue gain traction: No fixed address: How I became a 32-year-old couch surfer.