Why we make generational comparisons

Concerned with the growing squeeze on younger Canadians, Dr. Christopher Mackie — a medical officer of health in London, Ontario — asked his Board in 2015 to support Generation Squeeze. [1]

Great, right? Not according to Canada’s biggest lobby for seniors and retirees (“CARP”). Their spokesperson at the time made news by calling Dr. Mackie's request "idiotic", and even went so far as to assign us a motive, saying Gen Squeeze was  “trying to start an inter-generational war."

Though I’m not sure what the phrase “inter-generational war” even means, the obvious hostility of the critique caught us by surprise.

So I decided to reach out to CARP directly to find out what was going on. [2]

From that conversation and others, I think I have an answer.

Here’s the heart of it: some people see generational comparisons — e.g. showing how much more Canada's governments invest in seniors and retirees compared to younger Canadians — as intrinsically and unavoidably divisive. [3]

The comparison itself is what CARP thought was “idiotic."

The comparison itself is what they thought pit generations against each other and was presumably where things got all weird and disintegrated into talk of “inter-generational war."

It’s easy to understand how after seeing our materials, some people might look up and think, “they want to take things away from seniors and retirees, things they’ve worked their whole lives for.”

It doesn’t matter how obsessive we are in stating the contrary, sometimes a certain graphic or chart or sentence will be taken the wrong way and just stick.

That sensitivity is why some people think we should simply organize around the need to invest in younger Canadians full-stop, and leave demographic comparisons out of it. [4]

But then we're told “the cupboard is bare”

The trouble is, for decades, groups have been calling for increased investments in younger Canadians, often with little to show for it. The answer frequently comes back from our governments that "the cupboard is bare." There's simply no money, or so the claim goes.

But then every year our governments seem to find a way to increase spending on programs and services that primarily benefit our parents and grandparents, the most notable draw being increased medical care spending. [5]

Indeed, Canadian governments collected an extra $11 billion in taxes as of 2016 compared to 1976, but spent an additional $38 billion on medical care for Canadians age 65+, leaving a $27 billion tax-collection gap. The shortfall was covered by spending ~$18 billion less on programs for younger Canadians, and by growing government debts. [6] Another way to put it: since 1976 Canadian governments increased annual per person spending for seniors 4.2 times faster than for those under the age of 45. [7]

So governments can and are finding ways to fund improvements to public programs, just not so much for young people (e.g. 20s, 30s and 40s).

That is the uncomfortable truth. That is what generational comparisons allow us to see very clearly. And it's something we don’t think we have the time to dance around.

If it stings, it’s probably because it should

If learning about generational differences in public finance stings, we think it’s probably because it should.

In a recent cross-national comparison of levels of Intergenerational Justice in 29 OECD countries, Canada placed near the bottom, at 25 out of 29. [8] Reading that study, it stung to learn that Canada has among the highest ecological footprints of all OECD countries.

It stung to learn that we have the 6th highest fiscal debt per child, and to be reminded that our child poverty rates are 3X higher than our admirably much-improved rates of poverty among seniors. [9]

When we see that our child poverty rate is 3x that of seniors, should we dismiss that generational comparison as divisive? Or can we take that stinging feeling and feel all the stronger for having faced it, and be inspired by the comparison that shouts at us: “LOOK, here is proof that we can do better”?

CARP isn't the only group who takes issue with our generational comparisons. Some people and organizations doing important work on poverty and income inequality don't like it, either.

They often point to the many seniors who continue to live in poverty and suggest that our population-level comparison makes it seem like all seniors must be living high on the hog (which — of course — is not the case), and so does these Canadians a disservice.

We totally get it. One of the risks of population-level statistics are their ability to brush over large variability in individual circumstances, which can come across as presumptive and even disrespectful.

And yet... we need to look at and talk about population-level trends if we're to understand the big picture.

When it comes to population-level trends, those same groups and individuals often suggest we stick to working on income inequality and forget about age. Income inequality, they suggest, is the real problem.

For example, a generational analysis can help explain current trends in income and — especially — wealth inequality.

Additionally, a generational analysis is very important to help reveal the impacts of current decisions on future generations. It may also be useful to point out that Gen Squeeze's generational analysis itself grew out of a gender analysis of child-rearing responsibilities and supports in Canada. [10] And our current work continues to provide this type of intersectional approach. [11]

75 cents. That's the average amount earned by full-time working women in Canada for every dollar earned by men, according to Statistics Canada. This wage gap widens for women who are Indigenous, living with a disability, racialized or newcomers.

In pointing this out, would you say I must be "idiotic" or trying to start a gender or race war?

Probably not, right? Because more information is better, and we're all in this together.

If you take us at our word that we want Canada to invest more in younger Canadians without inciting CARP's "inter-generational war" or taking anything away from our parents and grandparents, your next question probably is “OK, but then how would we pay for that?”

Excellent question. Turns out we’ve got some pretty basic options: (1) we can re-allocate money (e.g. from programs that aren’t performing well to more efficient/effective programs); (2) we can reverse inefficient tax cuts; or (3) we can raise new revenue.

Which leads to long and fascinating debates about the many specific options at our disposal. To keep things moving, I’ll sum up by saying “lots of ways!” and direct your attention to this footnote —> [12]

The point is before we get distracted by the many options governments have to invest in a Canada that works for all generations, we need to have the courage to face this fact: our governments are currently prioritizing older Canadians more than younger Canadians.

If Canadians in their 20s, 30s and 40s voted at comparable rates to Canadians 50+, would things be different? Yeah, probably. But resist the urge to simply point the finger at younger Canadians and walk away.

While we all need to take individual responsibility, increasing turnout and engagement among younger Canadians requires many things simultaneously:

Maybe we could find a way to organize ourselves and win victories for younger Canadians without actually pointing out how much we’ve done and are continuing to do for our elders.

But to me, that feels a lot like beating around the bush.

Then dig into budgets to see whether our public finances actually reflect that feeling of solidarity and equity.

And then, having revealed any imbalances, we can work together to chase a vision of a Canada that works for all generations.

Here’s the thing. With millions of Canadians struggling to make ends meet, with our global climate at risk of spiraling out of control, with biodiversity continuing to plunge, with resources becoming scarcer, and as billions of people continue to struggle with poverty, we have no shortage of complex and harrowing problems to deal with.

How can we hope to solve these problems if we can’t look the evidence in the eye, feel the sting of uncomfortable truths, and move forward together?

We don’t claim to have all the answers. And we admit our small team will sometimes make imperfect choices with imagery, headlines or content that may make it easy to mistakenly assign us a divisive motive. We’re truly sorry about that.

That said, history is full of examples where those trying to point out problems with the status quo are dismissed and marginalized by claiming they’re trying to incite conflict, just out to disturb the peace. And I suspect no matter what we say or do, some people will continue to look at us that way.

I don’t know, maybe making generational comparisons is idiotic. But it sure doesn’t feel that way. It feels like a deeper level of understanding. It feels motivating. 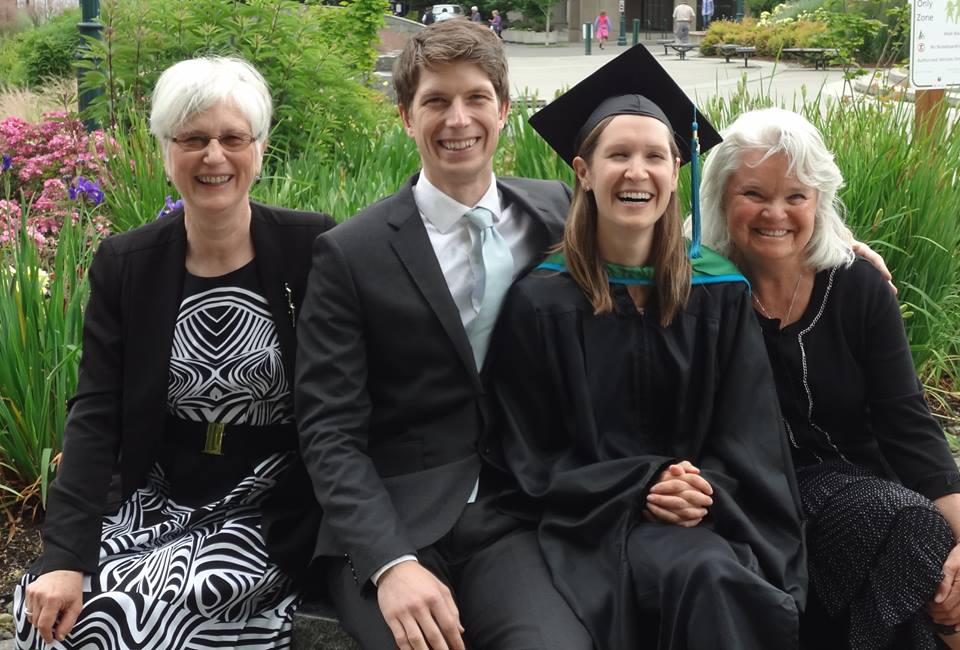 The author (2nd from left) pictured with his graduating wife (!!), mother and mother in law. We're all in this together!

[1] On July 16th, 2015 the Board voted unanimously to invite a speaker from Gen Squeeze, as a first step, presumably.

[2] I was able to reach Michael Nicin, CARP’s Director of Policy, and we had a good, if spirited chat. Afterward, I also consulted one of my most trusted advisors, my Mom, who’s a member of CARP AND Gen Squeeze. Those two conversations helped me get to the heart of the matter.

[3] Our use of generational comparisons includes analyses showing:

[4] You’ll notice that the major political parties tend to take this advice, sticking to age-neutral concepts like the middle class and avoiding generational comparisons altogether. There's a certain comfort to that route, but I think it throws away an opportunity to directly connect to younger Canadians’ lived experience and intuition around existing generational inequities. Wouldn’t it be cool if we had a leader who had the ability to give voice to what so many of us are feeling, the courage to face uncomfortable truths, and the positivity and leadership to unify us around that and move forward together? I think so. I think if done right, that could be a game-changer.

[5] For more discussion on medical care spending, refer to our commentary "The Reallocation Challenge," published in the Canadian Journal of Public Health. Notably, unlike the Canada Pension Plan, for example, medical care is NOT pre-paid. Meaning today’s working population is responsible for paying the tab.

[8] You can download the study, “Intergenerational Justice in Aging Societies: A cross-national comparison of 29 OECD countries,” here. It’s a good one.

[11] For example, when we point out that compared to 1976, 2.3 million more women aged 25-44 are in the labour force, as their participation increased from 54% in 1976 to 83% in 2016, and that despite the resulting increased demand for child care, annual spending on child care grew just $3.6 billion (compared to a $51 billion increase in medical care and OAS investments for seniors), we're making a combined gender and generational comment.

[12] First, we should clarify that when we say we “don’t want to take anything away from our parents or grandparents,” that statement refers to OUTCOMES. E.g. if our parents or grandparents are currently receiving services or benefits they would say they don’t actually need, that they would say aren’t producing better outcomes for them, then we think those things should be on the table.

Overall, funding options we explore include:

We look forward to a lively debate about these options to pay for a better generational deal.  However, we won’t let disagreement about the merits of these options distract attention from a fundamental problem with the status quo.